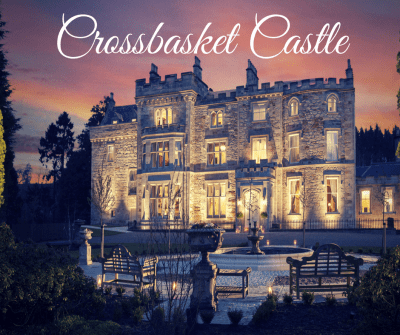 First on our list of ICMI properties to explore is Crossbasket Castle in High Blantyre. It has recently gone under extensive refurbishment and opened as a luxury 9 bedroom hotel in May, 2016. After just 3 months of opening it received its 5 stars from the AA Hotel ratings.

The tower of Crossbasket dates back to the 15th century. Crossbasket House has been passed onto several families throughout the centuries and was occupied by many families during the 19th century including Alexander Downie, John Caddell, and most famously by the inventor and raincoat manufacturer, Charles Macintosh (1766–1843). The Castle was sold in 1981 to the Latter Rain Ministries who ran the property as the Crossbasket Christian Centre until 2005. It was then sold to a developer with plans to turn the building into apartments. The developer went into administration and the building lay empty and neglected until 2011 when it was then bought by current owners Steve and Alison Reid-Timoney who have invested £9m into transforming it into the luxurious hotel and event venue which it is today.

There are nine breathtaking en suite bedrooms each decorated in a period style and named in honour of a historical custodian of this magnificent Castle. Every bedroom is finished with stunning period window and bed dressings and complemented with original antique furniture and luxuriously over sized beds. Original antique chandeliers hang from the ceiling and out the window you can see magnificent views of the grounds and river. The rooms are large and spacious with many including a lounge area for your further relaxation.

The Albert & Michel Roux Jr. restaurant at Crossbasket Castle is a sublime dining experience not to be missed. Overseen by legendary French chef Albert Roux who owns the first UK restaurant to be awarded 3 Michelin-stars (Le Gavroche) and his son Michel Roux Jr, the restaurant truly is an fine dining experience. You can enjoy afternoon tea with a glass of Albert Roux’s Blanc de Blanc Champagne, dinner tasting menus with the option of paired wines, three-course lunch menus, a lounge menu as well as a full Scottish breakfast, which is included with every overnight stay. The kitchen endeavours to use the freshest and most local ingredients possible and for this reason their menu changes frequently. You can enjoy dishes such as…
East Lothian crab, avocado terrine and sauce nero;
Borders veal and truffle choux farci with red wine sauce;
Warm Lemon madeleine with chocolate sauce and pistachio.

There are various golf courses close to Crossbasket Castle including Langlands, Gleneagles and Strathaven Gold Club. If you’re looking for luxury transport then 4X4 Hire Scotland Ltd. offer a Meet and Greet service and can deliver or collect vehicles from each of the distinguished ICMI properties. There is also a helipad and Heli Air Scotland Ltd, based at Cumbernauld Airport, can provide transport to and from any safe location in the country including most of ICMI’s properties or to a location close by.

Crossbasket Castle is becoming an increasingly popular weddingvenue. They hold wedding open day events throughout the year so keep an eye out if you are newly engaged or plan to propose!

Crossbasket Castle is the ideal place to treat a loved one. From afternoon tea to an overnight stay or a culinary experience at the Albert and Michel Roux Jr. restaurant, there is a gift suitable for anyone and for any occasion. For the full range of Crossbasket Castle gift vouchers click here.